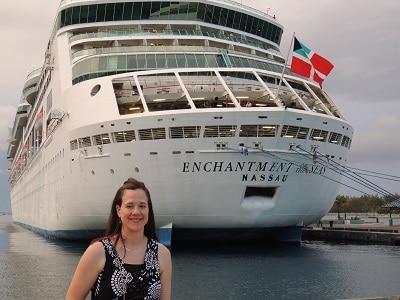 I am excited to report that I recently took a 3-night Bahamas cruise on Royal Caribbean’s Enchantment of the Seas.  This was my first Royal Caribbean experience.  Why did I choose Royal to take my cruise?  My client’s suggestion.  Even though it is my job to give my clients my suggestions on travel and travel suppliers, I also listen to my client’s and get their feedback of which suppliers they like.  Royal has been consistently reviewed by my client’s as a great experience and highly recommended.  When something comes highly recommended you tend to what to try it.

I took my husband with on this familiarization 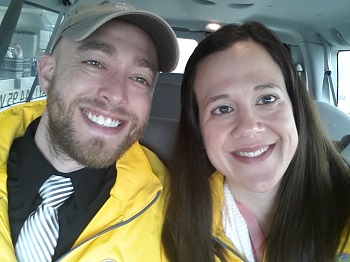 trip and we decided to leave a night early.  Our ship didn’t require us to embark until Friday so we thought it would be fun to go down Thursday night and maybe get dinner at Downtown Disney.  Unfortunately for us, there were thunderstorms up and down the east coast which made for a very bumpy plane ride.  It is also hard to walk around Downtown Disney when it is raining so we opted to eat near the hotel.  I normally don’t say this when in Orlando but the rain actually ended up being a good thing because even though our hotel had shuttle 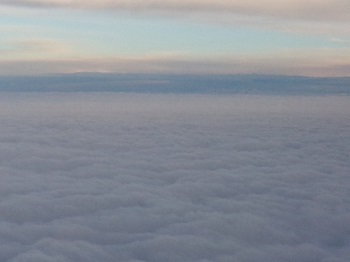 s to the Disney theme parks, it did not have one to take us to Downtown Disney.  Yes, Downtown Disney is part of the Walt Disney World Resort and even though this hotel was a Disney partnered hotel, they just didn’t offer a shuttle there.  We found a Giordano’s Chicago Pizzeria in the shopping plaza right next to the hotel.  We ate at the original one in Chicago and we loved their pizza.  Their pizza was also great in Orlando!

After a great night’s sleep, we woke up to beautiful weather.  Since we stayed in Orlando for the night we needed a way to get to Port Canaveral so I decided to book us a private transfer through Viator.  I really like this company because they offer transfers, tours, long weekend getaways, etc. all over the world and the pricing isn’t too expensive.  We ended up having Mear’s motocoach company which is Disne 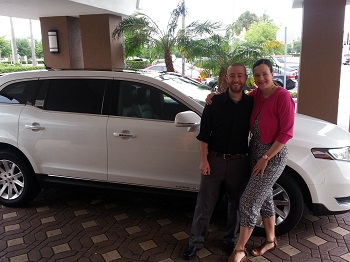 y’s go to motorcoach company.  Our driver was on time and the car they chose for us was a Lincoln SUV.  The car was clean, spacious, very high end amenities, comfortable, and didn’t smell.  Our driver was great!  He was from Venezuela and talked with us the whole way to the cruise port which was about an hour drive.

Now, it has been 15 years since I took a cruise out of Port Canaveral.  I had no idea what to expect.  Once we came over the bridge and got our first glimpse of several ships, excitement rushed over me and then panic.  There were three cruise ships that we saw:  Disney Dream, Carnival, and what I believed to be MSC but we couldn’t read the name.  No Royal Caribbean Enchantment of the Seas!  Now Royal has their signature blue 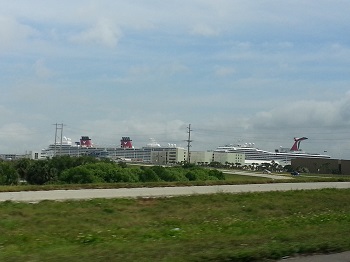 anchor on their ship’s stacks.  No fourth ship and no blue anchor, time to panic!  We had the right day, we were there five hours before the ship was supposed to leave dock, but where is it?  Our driver took us to the Carnival cruise line terminal.  He pops the trunk and gets ready to let us out figuring that the ship had to be close by.  Well, when 3000 plus people are trying to get on one ship, you can image how hectic it is with everyone trying to get their luggage onto carts, and unpacking their cars.  This is where I take after my mother, but I demanded that he ask where the Royal Caribbean ship was.  He asked one of the luggage attendants about Royal Caribbean and the guy told him no this is Carnival.  The driver asked again where the Royal Caribbean ship is located, the luggage guy said at the new port just down the road.  Feeling relieved, the driver got back into the car and look confused.  We started off to the new port and within a few minutes we could see a single ship off in the distance.  Hope!  Blue anchor on the stacks, Enchantment of the Seas on the bow, and people unloading their luggage. Whew, we made it! 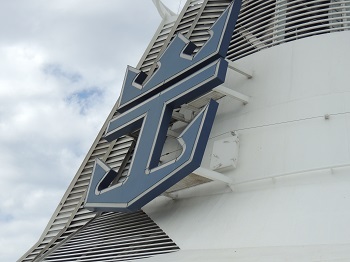 Now with all of my travels, one thing that I have learned is to listen to my instincts.  If you feel like something is wrong then something is wrong!  Don’t be afraid to ask questions and demand answers if you have too.  When I don’t listen to my instincts I have lost a whole large box of souvenirs, almost didn’t eat for 9 hours, and slept on a mattress that was about 100 years old.  We learn from our mistakes so I wasn’t about to make the mistake of being left at a port where I didn’t see our ship.

It was nice that our driver admitted that he didn’t know this was here and apologized, but I was still a little upset feeling like he was just going to leave us a the Carnival Cruise line terminal.  There would have been no way for us to walk to the Royal Caribbean terminal as it was about one mile away.  Even though the driver had learned something new that day, I would highly recommend this company as they showed up on time, did get us there on time, and the car was clean and didn’t smell.

Now, we did pay for the transfer up front but tip is not included in the pricing.  For a transfer service I typically recommend 10% to 15% of the net rate, taxes not included.  Since the driver had a nice clean car that didn’t smell, was personable, got us to the correct terminal, and took out our luggage for us, I felt that 15% was well earned. 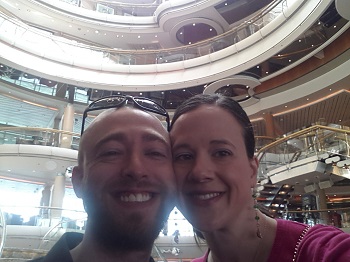