I have and here is why you need to go…

We recently took the whole family on a two week adventure.  Traveling with two little ones can give anyone anxiety let alone having to take multiple flights into different cities over a 12 day period.  Again, we were that family on the plane who were complimented on how well our children behaved and I am so thankful to have such sweet angels.  However, getting them up at 3am is not their favorite thing and by the time 3pm rolls around they were exhausted, screaming, and ready to take a nap.

The first leg of our trip was to Atlanta, Georgia.  I have been to the Atlanta area several times for work but I have never actually stayed downtown and enjoyed the sites of downtown Atlanta.  We stayed at the Georgian Terrace hotel which is a few blocks from great restaurants and shopping, but just out of walking distance.  When you walk into the lobby of the hotel you are taken back to a time when this hotel was considered first class for the Rockefellers and Jones.  The hotel’s opulence clearly comes out with its white marble columns and stairways.  They still have the old lantern light fixtures but updated them to have 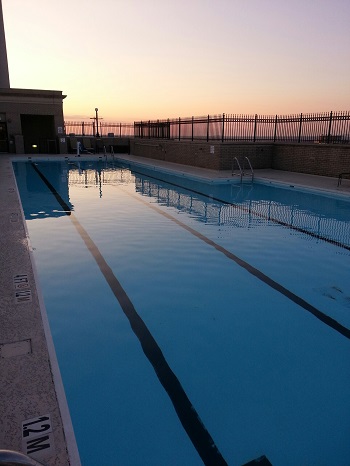 electricity.  I really felt like I was transported back in time to the early 1900’s when the hotel was first built.  Another great feature of the hotel is their panoramic view of downtown Atlanta from the roof top pool.  We decided to visit during sunset and the view was breathtaking.  They also had a restaurant and bar in the hotel and a full service fitness area.

We opted for a two-bedroom suite. Even though there were many great amenities in our room like the full washer and dryer and kitchen, the furniture was a bit out dated.  They also did not provide any silverware or utensils for the kitchen which made it difficult to eat our late night dessert.  It should be noted though that they were starting to renovate all of the rooms on our floor on the day we checked out, so maybe the furniture will be better and the kitchen will be fully stocked soon. The kids had plenty of space to run around but I must warn you, if you have little ones and are staying on a higher floor, you must watch them by the elevators.  The railings are wide enough for a toddler to get through and there is no glass or paneling to prevent this from happening.  Overall, the hotel was quite nice but I would prefer to stay in a hotel where restaurants and shopping were within walking distance.

Since we have never enjoyed the sites of Atlanta, we decided to buy the CityPASS®. A CityPASS® is a booklet of tickets for various attractions in the city you are visiting for one low price.

There are several major cities in the US who participate including New York City, Chicago, Boston, and San Francisco to name a few.  The CityPASS® includes admission to some of the most popular attractions in those cities.  For Atlanta, it included admission to the Georgia Aquarium, The World of Coca Cola, the Atlanta Zoo, Inside CNN studio tour, Fernbank Natural History Museum, College Football Hall of Fame and the Center for Civil and Human Rights.  Some vouchers make you choose admission to one of two places, but if you decided that you wanted to visit both places in the back of the booklet they give you a discount on admission to the other place.  It really is a good deal for anyone who is visiting one of the CityPASS® cities and plans on seeing the places in the booklet. The booklet expires 9 days from initial use.

Our agency has access to sell CityPASS® and so we decided to purchase them for the whole family.  This was our first time purchasing a CityPASS® but knowing that we were going to see many of the attractions that were included in the pass, we decided it was a great deal.  How the CityPASS® works is that you purchase it online or, if available, at one of the locations, and they provide you with a booklet of admission tickets or vouchers.  Note that the admission tickets must be intact to be valid.  Once you have your booklet you simply go to any of the locations and hand your booklet to the person at the admissions counter.  They take out their voucher and you’re done.  I found the CityPASS® extremely easy to use and there were even some perks in having the book, like the IMAX presentation that was included in our admission to the Fernbank Natural History Museum.  I would highly recommend the CityPASS® if you are heading to a city that uses it.

Our first stop was to the Georgia Aquarium.  As a fan of the Travel Channel, I had seen the Georgia Aquarium on there as one of the best aquariums to visit in the world.  Having lived near the Baltimore Aquarium for many years, I didn’t believe that there was another aquarium 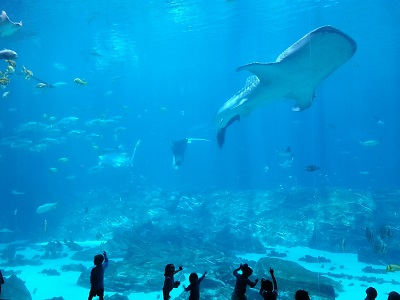 as big or as fascinating.  I was wrong!  The Georgia Aquarium had so much to see and do.  They have some animals that I have never seen in an aquarium or zoo before such as the Beluga Whale and the Whale Shark!  They housed the largest tank that I have ever seen, which currently holds four Whale Sharks and many other fish and sharks.  If you are a certified diver or a good swimmer you can go into the tank with the Whale Sharks and swim with them.  This experience is an extra charge.  The aquarium offers several interactive animal experiences as part of their behind the scenes tours and some of them are very reasonable priced.  If you are looking for something fun to give as a gift, I highly recommend checking out these tours.

There was plenty of activities to keep the kids busy.  They have a 4D short film with their mascot Deepo about conserving our oceans and an interactive talk with Deepo where kids can ask him questions in real time.  They have a Dolphin show, and also there are several employees on hand to answer questions and tell fun facts about the animals.  I was so excited to see my favorite sea creatures of all time, the Sea Dragon. 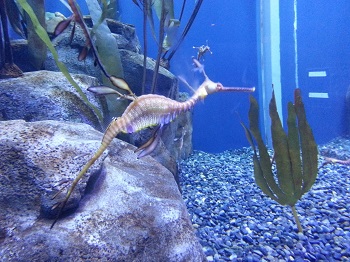 They are very rare and I had seen a moving exhibit of them at the Baltimore Aquarium many years ago.  They are very relaxing to watch as they almost seem to be dancing in the water rather than swimming.  The whole family really enjoyed the aquarium and there are several activities and exhibits to keep anyone occupied for a few hours. 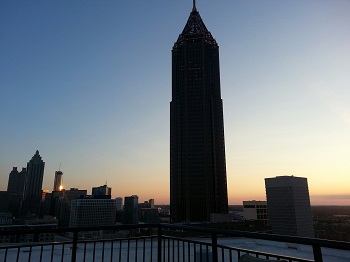 More to come next week on whether or not it is worth it to go to the World of Coca Cola.