So if you read my previous post, then you know our adventures to the Georgia Aquarium exceeded our expectations.  Seeing four whale sharks float above was one of the best experiences that I have had in a while and seeing the kids’ faces light up with excitement was even better.  Having had this breathtaking experience we were ready to see what else downtown Atlanta had to offer.   Next up was Zoo Atlanta, which is a bit south of the city.  It is not within walking distance of the city center, so make sure you find some type of transportation to get there.  After handing over our vouchers using the CityPASS®, we were in.

Zoo Atlanta boasts that it has been around since the late 1800’s.  After walking around the zoo there are definitely some parts that I believe to be original and give it that old world character.  The zoo is made up of four areas: African Plains, African Rainforest, Asian Forest, and the Kids Zone.  They have many amazing animals including lions, elephants, and Gorillas, but the one animal that I was most excited about seeing was the giant panda.  There are a few zoos in the whole United States that actually house these beautiful creatures.  Despite them being called “giant” they aren’t much larger than a small brown bear.   Zoo Atlanta had four of these guys playing around and eating bamboo.  Our toddler’s favorite part of the zoo was the naked mole rats.  Yes, rats.  They have an indoor exhibit housing just these little guys, and they have it set up to really educate you on how they live.  However, they are small, naked rats running around burrowed out holes so it did make me feel a bit uncomfortable.

The kid’s zone at the zoo was very large and had a lot of great activities to keep the kids occupied for several hours.  There was a zoo animal themed carousel, train, climbing wall, canopy center with large slide, and an extremely large play land with unique playground activities.  They also have a petting zoo area with goats and pigs but, thankfully, it was closed that day.  Animals can be unpredictable and I am always cautious about letting my little ones get too close to something that is three times their body weight.  With our voucher from the CityPASS® we received a bracelet for endless rides and climbs.  This worked out great for us as we rode the train four times and the carousel twice.  Each ride is around $3/person/ride, so it was pleasant surprise to have this included in our admission with our CityPASS® voucher.

When visiting Atlanta if you are not familiar with the drink Coca Cola, you will definitely be by the end of your time there.  Coca Cola has their main headquarters in Atlanta along with a tourist attr 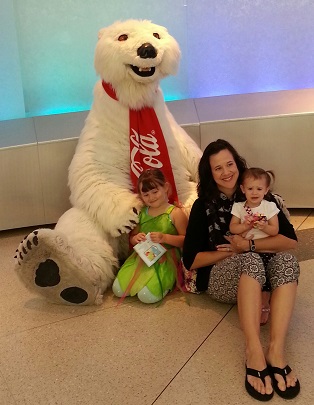 action showcasing all things Coca Cola called the World of Coca Cola.  They have everything to see from old Coca Cola vending machines, to the various looks of the Coca Cola products, and a secret vault containing information on how Coca Cola came about.  They do a good job of crowd control as they have a short 10 minute presentation welcoming you and then you enter into a movie theater where they show a short movie about how Coca Cola brings the world together.  Once you are through these two areas you are then free to roam the various exhibits.  There is even an area where you can get your picture taken with Bear, the Coca Cola mascot.

There are several exhibits at the World of Coca Cola that I found to be quite different than what I had expected.  They had a 4D movie about a 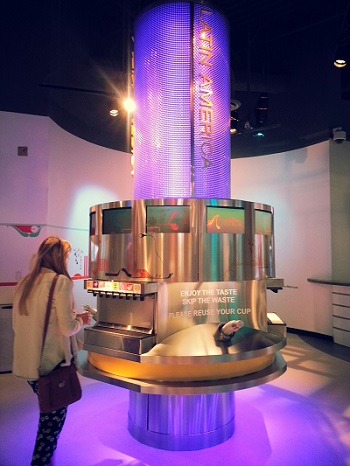 scientist trying to figure out the secret formula of Coca Cola while being transported all over the world.  I have been to 4D movies before but this was the first time where the seats actually moved.  I don’t recommend this for someone with back or neck problems, but the kids found it fun.  They also liked the taste station.  This is an area that is broken up into continents where you can taste the various Coca Cola products available in certain countries.  Greece had a pineapple flavor soda that was quite refreshing but my favorite sod

a was from Tanzania called Stoney Ginger Beer.  It was very light and left a nice after taste of ginger in your mouth.  It also did not have a lot of sugar so I didn’t get that sugary build up on the back of my tongue like I do when I drink ginger ale.  It was a lot of fun going around to see how different continents like certain flavors.  South American countries really like a sweeter fruit based drink while African countries like more ginger and lighter flavors.  Something to definitely look forward to when you visit there!

One of the most interesting, and extremely innovated things at the World of Coca Cola was the cell phone or smart device charging stations located throughout the building.  It was a booth shaped like a Coca Cola Bottle with various slots to put your phone or smart device into.  All you had to do was swipe one of your credit cards and enter a pin number.  An empty box would be selected and you simply put your phone into the box and attach it to the charger.  Once you have closed the box it locks.  You are now free to walk around and your phone is charging.  Once you are ready for your phone you go back to the box and swipe your credit card, put in your pin number and your box opens.  This is a completely free service that Coca Cola offers to you even though you use a credit card as your key card.

Last on our places to visit was the Fernbank Natural History museum which is located south of Atlanta.  It is located in a very nice, scenic neighborhood where we saw Owen Wilson and Ed Helms shooting a movie (How awesome is that?!?).  When you pull up to the museum you are welcomed by several statues of dinosaurs. 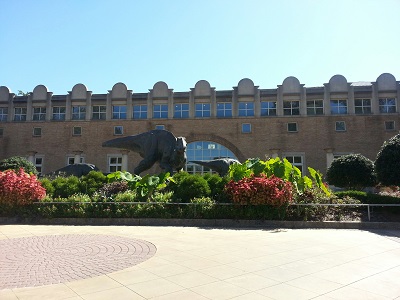 Inside they have several more dinosaurs in the main atrium and in an exhibit, which the kids absolutely loved.  With our CityPASS® voucher we were given access to an IMAX movie, so our oldest decided they wanted to see the polar bears movie.

After the movie we walked around to the various exhibits including an Egyptian Queen’s belongings but the kids really enjoyed NatureQuest the most.  This indoor play and learning area for kids of all ages allowed kids to build walls with blocks, look at bugs under microscopes, find fossils hidden in the walls, and walk across and plank bridge.  There was so much for them to do in this area that we stayed here for a few hours.  The Fernbank really has something for everyone and is a great place for multi-generational families to have some fun together.

I have to say, I was very surprised how much I enjoyed my downtown stay in Atlanta.  We didn’t have a bad experience once and all of the activities that there were to keep the kids busy and entertained kept this mommy happy!