This Old Town in port has Old World charm with one of, if not the oldest pharmacy’s in the world.  This city has been a maritime city for centuries and due to its easy access to the sea, became one of the wealthiest port cities in Europe.  Over the vast years Dubrovnik has seen its fair share of destruction but you wouldn’t even know from the city’s beauty and charm. 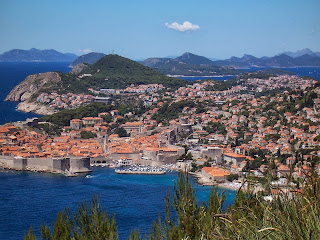 When we awoke in the morning the ship was still coming into port and we were able to get some beautiful and very scenic photos of Croatia’s coastline.  I wasn’t really sure what to expect of Croatia.  The stories that I heard were the days when it was part of Yugoslavia, which was not always a good time. 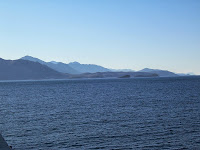 coastline melted away any apprehensions I had about visiting this country.  The ship we were on was too big to dock at the port so we had to be tendered into the port by life boats.  It was good to know that they worked. 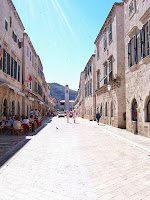 Once we got off our tender we entered through the gates into Old Town.  Now a word of warning: we were offered bathrooms right before going through the gates.  These bathrooms were more traditional for the area, nothing more than holes in the ground with stainless steel foot-grips.  Not a wonderful experience.  Once we got into Old Town, modern facilities were available.  So I recommend holding it if you can!  Now back to walking through the gates, I felt like I had gone back in time.  The light colored stone buildings one on top of the other lining the cobblestone streets was like something out of an Audrey Hepburn movie.  This is not what I expected at all.  It was beautiful and it looked so well preserved!  We were there so early in the morning that nobody was on the streets yet except the local cats.  Yes, I am a cat person so there will be pictures of cats in my blogs. 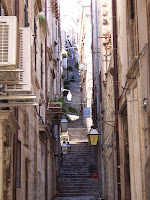 Since not much was open yet, we were told to walk around for about 30 minutes and then our tour would start.  This is the point where I start walking around as fast as I can while taking in the sites.  You never know where these tours are going to take you so I always sneak off to get into some stores or get some unique pictures of the architecture.  There were so many narrow alleyways with steep staircases to get to the top.  Each alleyway had an array of shops, restaurants, eateries, and apartments.  Again, nothing was open so I couldn’t get any good shopping in yet.

The tour started in front of Onuphrius‘ Fountain.  This is a beautiful large stone fountain that people congregate around through out the day to get pictures, relax, or fill up their water bottles.  Which I personally would never do in a foreign country.  We headed into the Franciscan Monastery which is one of the oldest pharmacies in Europe.  When you walk in you can see the set up of the pharmacy and they still have some of the tools on display.  We also walked the inside court yard area of the monastery, which is beautiful.  The blooming flowers and well manicured garden just made for a picture perfect morning.  There really isn’t much else that we ventured into here, but we did enjoy reading some of the burial markings of old monks.  We then made our way back out to the fountain and down Stradun.  This is the main street.  There are a lot of great little stores that have anything from jewelry to knick-knacks.  There was also a fresh produce market going on in the square.  There were fresh figs threaded through some yarn that looked like a necklace.  They were the biggest figs I have ever seen.  There are many days that I kick myself for not trying them. 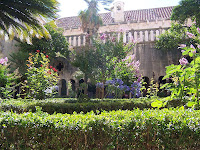 It was now time to leave the city center and start our bus tour.  We did a lot of driving around and the scenery seemed very bare.  It almost was desert-like to me but this changed when we came upon our restaurant.  The restaurant was far from the port but lush with trees and a small stream going through the center of the property.  The ambiance of the restaurant was beautiful and the food was really good too, typical lamb and potatoes but it hit the spot. 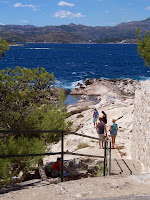 After leaving the restaurant we headed back to the coast but further south.  We hit a nice resort area where apparently a lot of celebrities like to go for peace and relaxation.  There were a lot of boats on the water but we didn’t see a lot of people swimming.  The water was really choppy that day but it was this beautiful deep blue color that I have never seen before in my life.  We took the mile walk around the lagoon and noticed that there were several beaches.  Well, not exactly what we would call a beach.  Their version of a beach at this lagoon was large rocks.  Apparently you just jump off of them to get into the water.  Some of the rocks had ladders attached to them so you could get back out.  I think I will stick with the sand.

I call Dubrovnik a hidden gem because its’ beauty and charm were something I really didn’t expect.  Places like this, the ones that truly surprise you, are the ones that remind you how much Life is Better Traveling.