I am so excited that we have finally reached my favorite destination.  But first, I want to say thank you to everyone who read my last three favorite destinations and has shared them on social media to all of their friends.  We have had an amazing response to each of them.

Now this last destination is not going to be a country like the others.  Though I did enjoy the country side, there was so much to see and do in this city that I have to share my top five favorite places in…Budapest!  If you have been to Budapest, you know how amazing this city is with its’ various periods of architecture, delicious food, interesting culture, and endless entertainment and shopping.  Because there is so much that I loved about this city, it was hard for me to pick my top five favorite spots, but here they are.

#5  Heroes’ Square  or in Hungarian, Hősök tere – The square is surrounded by the Museum of Fine Art and Palace of Art, but to me it wasn’t about 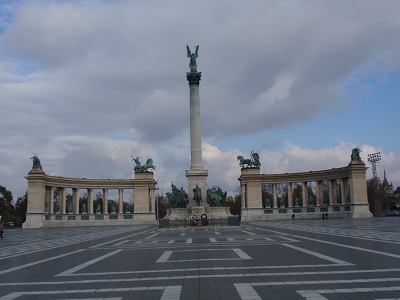 what surrounded it, it was about what it stood for: Freedom.  In the front of the monument is a large stone dedicated to the memory of the heroes who gave their lives for the freedom of their people and their national independence for over a thousand years!  That is right, a monument dedicated to those who fought in wars and battles a thousand years ago.  A country that didn’t forget anyone and built a monument to remember everyone.  It really is something amazing to be standing in this semi-circle of statutes and monuments that was built over a 100 years ago. 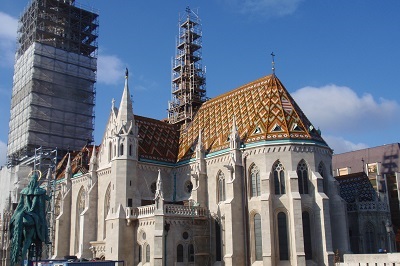 two parts, one side of the river is the Buda side and the other side is the Pest side.  Matthias Church on the Buda side in the Buda Castle District.  When you come upon the church you are expected to be in awe by it’s massive steeple and architecture, but what catches my eye every time is the multi-colored roof.  This orange and yellow roofing stand out on top of the light gray, almost white façade.  This church was where coronations of Kings, and burials of royalty took place, and when you walk into the church you can see why it was the chosen venue.  Ceilings so high you think they touch the sky, and ornate stained glass windows, and a large amount of seating. 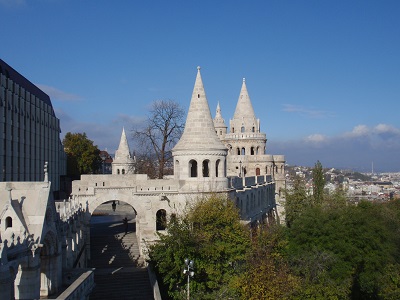 #3 – Fisherman’s Bastion – Believe it or not, the Fisherman’ Bastion is actually a terrace on the Castle hill.  To me it appears to be an ornate wall protecting the Castle hill, or what we typically call the wall to a fort.  This wall does get its’ name from the guild of fishermen that were responsible for defending the stretch of land in the Middle Ages, and the seven towers represent the seven Magyar tribes who settled into the region in 896.  There are several stairways, and walking paths that boast the most beautiful views of the Danube river and the Pest side.  On a clear day 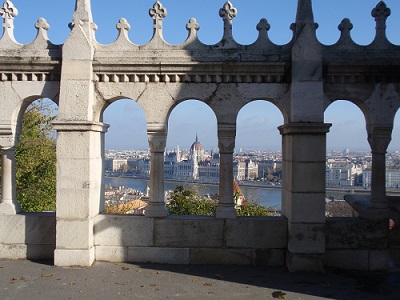 you can get amazing pictures of the Hungarian Parliament building.  Since you will be doing a lot of climbing stairs and walking, just down the way is a mascarpone shop that showcases amazing edible art and demonstrations on how to make some of their pieces.

#2 – Bridges of the Danube – The Bridges that connect the Buda and Pest sides are each different.  Some have enormous rock statues in front of them and other are more modern with large gateways as an entrance.  When we took our tour we were told that during World War II throughout Europe several bridges where destroyed, but Budapest was one of the few cities whose bridges were not destroyed.

There are eight bridges in total, and my two 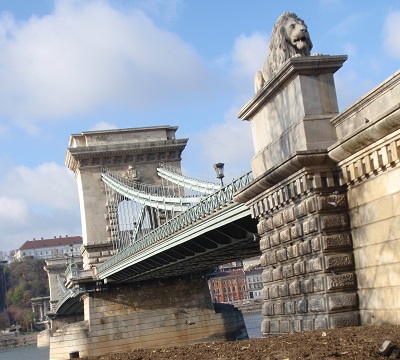 favorite bridges are the Chain Bridge and the Liberty Bridge.  The Chain Bridge is very close to the parliament building and gives easy access into the main cultural center of Budapest.  This stone bridge was built in the early 1800’s and was the second bridge to be built over the Danube river.  Stone lions guard over the passengers who come and go, and at night they light the bridge up beautifully so that you can get really good pictures of the bridge in the foreground and Castle Hill in the background.  The Liberty Bridge acted as a toll bridge for some time and this can be seen by the houses that were built at both ends of the bridge.  There are four Turuls statutes, one on each pillar of the bridge.  If you don’t know what a Turul is that is ok, neither did I, they are falcon-like birds, prominent in ancient Hungarian mythology. 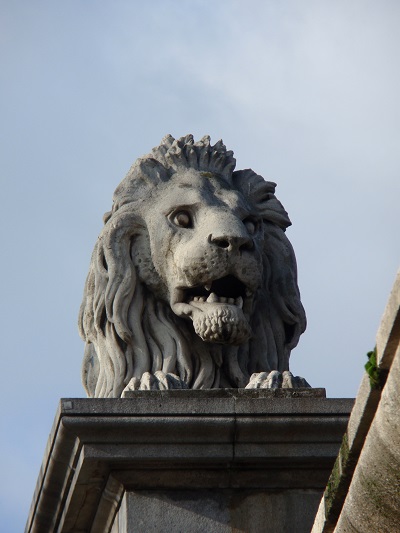 #1 Hungarian Parliament Building – I had seen pictures of the inside of this building prior to actually going into it, but seeing it in person was absolutely breath-taking.  You first walk up a 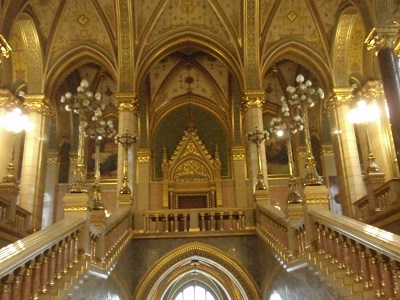 grand staircase fit for a king into an area where all the walls are gold!  That is right, gold!  It is absolutely breath-taking and unfortunately, my pictures won’t do it justice.  Guided tours are the best way to get around this building as there are so many rooms, and some of them are very long with nothing in them.  They are called waiting rooms, but I could fit two of my house into this long, wide room.  I must say I was a bit surprised when we came upon the Holy Crown of Hungary.  A beautiful crown with a slightly crooked cross on top.  We had asked our guide if that was symbolic for something, and he told us no that someone has either dropped it or knocked slightly resulting in the cross tilting to one side.  It surprised me that no one wanted to fix it but after 300 years of it being this way, I guess it is now a tradition. 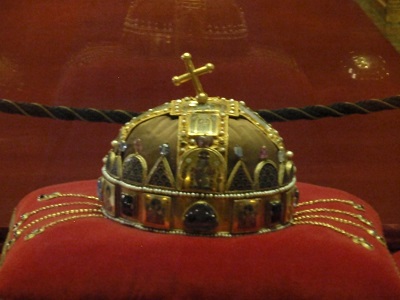 I love ending my newsletter about the food of the country.  Hungary is known for its paprika and this bright red colored pepper is used in every dish. It may appear to an outsider that the Hungarians even worship this pepper as it is embroidered onto table clothes and proudly displayed in shops.  Make sure to buy some to bring back with you.  If you are used to the paprika here in the states then it can be a bit overwhelming at first, but it is sure to make your tastebuds dance!  I was pleasantly surprised how flavorful fresh paprika is and when properly used, can really make a dish pop in color, flavor, presentation. 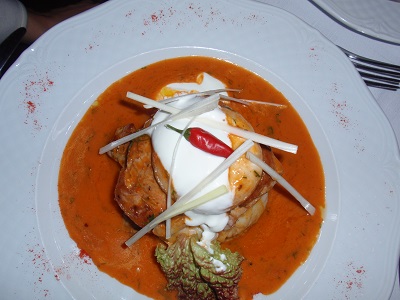